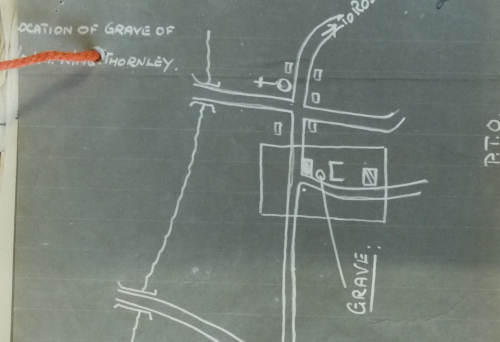 After the renforcement from No.229 (RAF) Squadron, a second backup group arrives with a detachment of three pilots from No.242 (RAF) Squadron, B Flight. They are Pilot Officer Robert D. Grassick [1], William L. McKnight [2] and Percival S. Turner [3]. They already have a little experience since they joined No. 607 (RAF) Squadron on 14 May, and participated in some operations, which have already cost the lives of Flight Lieutenant John L. Sullivan in charge of the detachment.

The No.615 Squadron leaves Vitry-en-Artois and Abbeville for Moorsele with twelve Hawker Hurricane Mk I. It is during this transfer that Pilot Officer Robert D. Grassick (KW-X) commits an unfortunate error when he claims a possible Junkers Ju.88 bomber. This one turns out to be a Bristol Blenheim Mk IV (N6168 TR-A) of No.59 (RAF) Squadron returning from a reconnaissance mission. Flight Lieutnant G.V. Smither succeeds, however, in putting his severely damaged aircraft on Vitry-en-Artois with his wounded gunner (Aircraftman Davy J. Pitcher) [4].

In the afternoon, nine Hawker Hurricane Mk I take off under the command of Flight Lieutenant Leslie T.W. Thornley to escort a Westland Lysander. Between Tirlemont and Brussels, British pilots are surprised by several Bf.109. The Lieutenant Flight Leslie T.W. Thornley (N2335) was immediately shot down in the vicinity of Rosières and killed. According to Pilot Officer Thomas C. Jackson (N2338):

« I opened the cockpit as I could not see much to rear. About a minute later, while flying with the sun behindn we wera bounced. The first I knew of it was when I was hit. An aircraft went past beneath me and I gave chase, but my engine cut. A second 109 came by and I had a go at him – believe bits of his tail came off. Fired at it again from behind. Saw aircaft all over the place. (…) My aircraft was hit heavily and there was a huge explosion. I had my gloves and flying boots on, but not my flying helmet. I did not unplug oxygen lead etc, just leapt out after releasing side panel. Opened the parachute and thought : God, it’s quiet ».

He is captured as soon as he arrives on the ground by German soldiers. Injured and suffering from several burns, he remembers:

« One soldier produced a big knife and cut open my collar, and another produced a hypodermic syringe and injected me. A vehicle arrived and I was told to get in ; an oberleutnant sat in the back and covered me with a pistol. My own pistol had six rounds of locally bought .38 ammunition, as I had used that issued potting cans in a river. These appeared to be blunt-nosed and I thought the German might think they were dumdum, but he could not open my pistol so fired off rounds into the ground – I was greatly relived. I was taken to a field hospital at Tirlemont and spent two days in a room with eight or nine German officers ; one badly wounded with a stomach injury made lots of noise. I was moved to a large building with a stone floor, amongst some hundreds of British troops, and then transferred after a week to Maastricht ».

A third pilot is lost, in this case, the Pilot Officer Brian P. Young whose Hawker Hurricane Mk I (P2577) crashes in flames near Essene. Burned in the upper body and face, however, he manages to jump. He is, however, unlucky because he is immediately targeted by British soldiers who open fire in his direction, then throws a grenade, before realizing that it is one of them .

He was taken to a field hospital in Dieppe before being evacuated to Saint Nazaire. Having decidedly no luck, his ambulance is affected, arriving in the port, by a shrapnel shell killing almost all occupants. Brian P. Young escapes miraculously to be on board a ship bound for England.

He will not be coming back to No.615 Squadron. After a long hospitalization, he returned to service in 1942 as a Short S.25 Seaplane pilot at Sunderland Coastal Command, before being transferred to the Middle East on various commands. He remained in the RAF after the war by performing a series of senior positions, while attending courses at the Imperial Defense College. He retired on 5 May 1973 with the rank of Air Vice-Marshal and died on 26 July 1992. [5]

For his part, the Pilot Officer Robert D. Grassick (KW-X), very active on this day, is able to claim a German fighter.

It is difficult to identify the confrontation in question for lack of the time during which this escort took place. Thus, Brian Cull [6] and Donald Caldwell [7] mention a confrontation around 15h50 with the II./JG 26, which claim three victories (identified as Morane 406 and Hawk 75A) despite the loss of a aircraft (pilot killed) This analysis is, however, contradicted by Arnaud Gillet [8] and Peter D. Cornwell [9], who make a connection with the events specific to No.87 (RAF) Squadron.

Another hypothesis would be that of I./JG 27 claiming several Hawker Hurricanes in the vicinity of Brussels around 13h40 (unfortunately some of these claims do not have a precise time). Thus, the Flight Lieutenant Leslie T.W. Thornley would have fallen victim to the Oberleutnant Gerhart Framm of the 2.JG 27. Conversely, two Bf.109 E-3 of the I./JG 27 were damaged, including that of the Feldwebel Otto Sawallish.

Once again, for lack of more details, it is difficult to match the facts, besides nothing proves that all the events specific to the No.615 Squadron takes place at the same mission.

Flight Lieutenant Leslie T.W. Thornley was 26 years old. His body was found and buried by men from Lancashire Fuesiliers near Rosières (Belgium). His grave seems to have been lost and his name is now commemorated at Runnymede Memorial.

[1] Robert Davidson Grassick (41579) was born in London (Ontario – Canada) on 22 May 1917, and joined the RAF with a SSC in November 1938. After his training at No.5 (RAF) Flying Training School of Sealand, he was transferred to No.3 (RAF) Squadron (September 1939) then No.242 (RAF) Squadron (November 1939). He was seconded urgently to No. 607 (RAF) Squadron on 14 May 1940 with three other B Flight pilots from his squadron. SHORES Christopher ; WILLIAMS Clive. Aces High: A Tribute to the Most Notable Fighter Pilots of the British and Commonwealth Forces of WWII. 2008, Grub Street ; Battle of Britain London Monument, The Airmen’s Stories – F/O R D Grassick: http://www.bbm.org.uk/airmen/Grassick.htm

[2] William Lidstone McKnight (41937) was born in Edmonton, Alberta, Canada on 18 November 1918. He joined the RAF in February 1939 with a SSU. After training with No. 6 (RAF) FTS Little Rissington he joined Squadron No.242 (RAF) on 6 November 1939, before being seconded to No. 607 (RAF) Squadron on 14 May 1940. Battle of Britain London Monument, The Airmen’s Stories – P/O W L McKnight: http://www.bbm.org.uk/airmen/McKnight.htm ; SHORES Christopher ; WILLIAMS Clive. Aces High: A Tribute to the Most Notable Fighter Pilots of the British and Commonwealth Forces of WWII. 2008, Grub Street, p.437.

[3] Percival Stanley Turner (41631) was born on 3 September 1913 in Ivybridge (Devon – England). His family emigrated, however, to Toronto, Canada where he studied engineering while joining the No.110 Squadron of the Canadian Auxiliary Air Force. He joined the RAF, with a SSC, November 1938. After his training with the No.7 (RAF) FTS of Peterborought and No.1 (RAF) Fighter Training School of St.Athan, he joined No.219 ( RAF) Squadron, October 4, 1939, before being transferred to No.242 (RAF) Squadron on 20 November 1939. He was sent to France on secondment to No. 607 (RAF) Squadron on 14 May 1940.
Battle of Britain London Monument, The Airmen’s Stories – F/Lt. P S Turner : http://www.bbm.org.uk/airmen/TurnerPS.htm