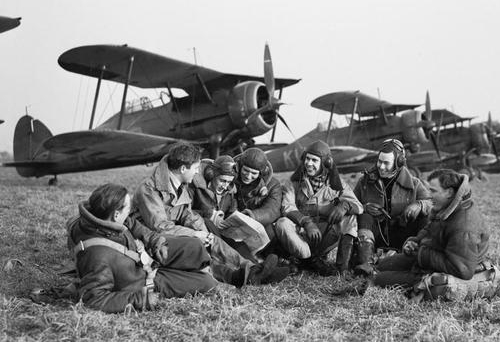 On 4 October, No.615 Squadron learns its imminent transfer to France to join the Air Component of the British Expeditionary Force. This choice may seem odd due to the lack of pilot experience and obsolete equipment with the Gladiator Gloster. This is not a coincidence, if several regular pilots of the Royal Air Force were sent. It is true that the case of No.615 Squadron is not unique since another unit of the Auxiliary Air Force is present : No.607 (County of Durham) Squadron. This choice is moreover dictated by a long reflection within the RAF concerning the commitment of the air force on the continent in case of war.

The first concrete elements appear in February 1938 when the composition of the British Expeditionary Force is fixed. A first approach of War Office towards the Air Ministry is engaged to revise the initial plan by requesting the presence of two additional Squadrons of fighters. The request is accepted in principle, although on 29 April a first remark is made due to a lack of adequate equipment, and a necessary coordination with the French Air Force to confirm or not the necessity.

At the same time, a report by the Imperial Defense Joint Intelligence Committee, dated February 1939, on the lessons of the fighting in Spain, indicates some surprising conclusions to the use of fighter aircraft in support of ground operations. In this hypothesis, it is indicated that the Polikarpov I-16 monoplanes have been very useful against ground targets [1]. If the report is quickly rejected by the Air Ministry arguing that the conditions of operations in case of conflict with Germany will not be those of the Spanish Civil War, the defense of Gloster Gladiator is strengthened .

At the same time, a dispute broke out between Air Commodore John C. Slessor (Director of Plans, Air Ministry) and Air Chief Marshal Hugh C. T. Dowding. The first modifies the plans by requiring now at least eight Squadrons of fighters to be used on the whole front if needed.

However, this argument is the subject of a frontal opposition by Hugh C. T. Dowding on the basis of two arguments: on the one hand, modern fighters can only operate on well-equipped air bases ; on the other hand, the current equipment of the RAF is insufficient to fulfill the dual mission of defense of the British territory and the external operations.

Finally, a difficult agreement is obtained for the sending of six squadrons of fighters in France …, agreement relatively misinterpreted by the parties in presence : John C. Slessor hoping to wait for the impending retirement (June 1939) of Hugh CT Dowding [2], while the latter considers that this agreement gives priority to the defense of the United Kingdom and that it is the maximum allowed.

A second argument reinforces his defense. In a report on the role of the RAF in France [3], Air Commodore Keith Park R. strongly advises the sending of Spitfire and Hurricane on the contains on the grounds that, according to a very curious argument, the units concerned are not trained and equipped for the fight against fighters. He explains that these modern interceptors are too fast and not maneuverable enough to deal with enemy fighters and ground-engaging aircraft. In this role, Gloster Gladiator is, in his opinion, much better suited.

This argument is quickly reinforced by the opinion of Air Chief Marshal Edgar R. Ludlow-Hewitt (in charge of Bomber Command), which also recommends the use of Gloster Gladiator or even Gloster Gauntlet as the best option to escort his bombers.

Finally, the last plan provides that in the event that a war broke out on 1st September (date chosen ironically arbitrarily), only six squadrons of fighters on Hawker Hurricane would be sent to the continent, despite the pressing demands of the army for increase the number. A final decisive reinforcement was thrown into the balance on 14 September by Air Vice Marshal William L. Welsh (in charge of aircraft supply). In his report [4], he explains that :

“The production has exceeded the expectations to equip our Squadrons, we must regret a waste even though the operations have not started yet (…). In order to combat this predicament, it is appropriate to send to France only squadrons equipped with Gloster Gladiator (…). This aircraft is particularly popular with our pilots, while the many reports on the Spanish Civil War or events have proven the value of biplanes in air operations (…). It is therefore necessary to prepare as quickly as possible to the month three hundred copies of this aircrafts when needed (…). Moreover, it would be extremely useful to equip the next squadrons, sent to France, with this aircraft “.

Finally, after several meetings between Air Marshal Arthur S. Barratt (liaison officer with the Air Force) and General Joseph Vuillemin, it was decided in October 1939 to send two additional fighter squadrons equipped with the Gladiator Gloster. The choice is explained, therefore, by a double belief between the idea that this biplane is the best fighters in the desired role, and that of wanting to keep in the rear, for the defense of England, modern fighters [ 5].

Regardless of these debates, on 10 November 1919 the transfer order to France is announced Because of the bad weather, the departure starts five days later when the sixteen Gloster Gladiators take off from Croydon at 11h30 to land at Merville at 13h00. For their part, Flying Officer Walter O. Stern and Pilot Officer John R. Lloyd board transport planes with 54 men. The flight is conducted with Gloster Gladiator of No. 607 (County of Durham) Squadron, as well as a collection of very disparate transport aircrafts : five Armstrong Whitworth AW 27 Ensign, four De Havilland DH.86, an Avro 618 Ten, a Fokker and two Short L.17 Scylla. The rest of the staff arriving the next day aboard two Armstrong Whitworth A.W. 27 Ensign.

[2] The latter was then to be replaced at the head of the Fighter Command by Air Vice Marshall Christopher Courtney, who shared the position of Slessor. He will, however, be seriously injured in a plane crash in 1939, which will result in extending the Dowding service until June 1940 …