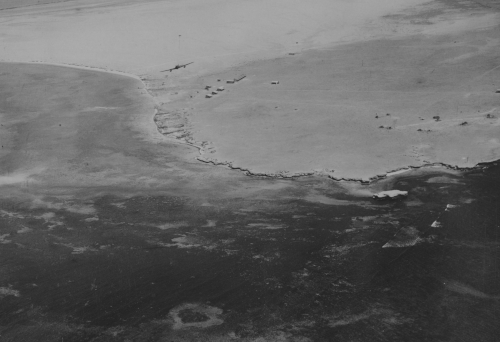 The day is mainly marked by a massive raid against the naval base of Assab. The RAF engages all its Bristol Blenheim Squadrons based in Aden. Thus, no less than ten, five and six sorties are performed, respectively by No.8, No.11 and No.39 (RAF) Squadron. The attack is a success as the Italians report the loss of twelve men (and three hundred wounded), as well as significant damage against several naval installations. A bomber is claimed by the DCA, however, no significant loss or damage is mentioned in the British documents [1].

« Halfway down the third leg,” reported Norris, “we were attacked by three CR42s.  The first burst of 20mm cannon fire hit Lampard in the leg and damaged the engine controls and hydraulics… I had no engine and nowhere to go except down.  Ahead was a quite small island, rocky and uneven.  I set up a classic forced landing approach, but there was a danger of overshooting into the oggin.  With no flaps, we almost stalled over the shoreline and I shoved the port wing and bomb carrier into the rocky ground a quickly came to a rest.  Before I could undo my straps and chute, the aircraft was surrounded by an unruly mob of Italians … I left the aircraft and tried to reach the rear gunner’s position but was prevented from doing so.  D’Arcy was unable to escape until Lampard had been lifted out and carried away.  His leg was almost severed and he was bleeding profusely. »[3]

The latter dies the next day[4].

Aerial photograph of an Italian aerodrome on the island of Harmil. There is a silhouette of a Vickers Wellesley on the first picture. These were taken on September 2nd, 1940 during the searches made by No.14 (RAF) Squadron to find the L2689 shot the day before. Source : Imperial War Museum

No.40 (SAAF) Squadron has a busy day when three Hartbees are sent to patrol the border (Buna – Korindil – Ajao sector) under the command of Captain C.M.S. Gardner. Several concentrations of men and camels are bombed, however two gunners are injured (Air Sergeant Crowther and Petzer), while the three aircraft are slightly damaged.