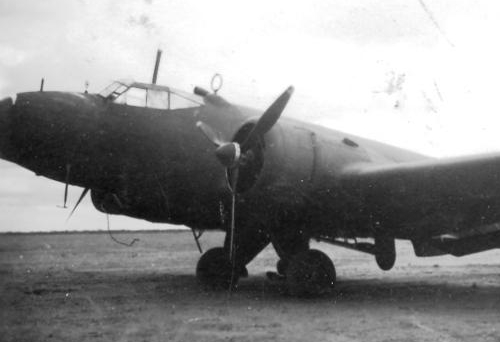 The attack began with the arrival of a first formation of four Junkers Ju.86 [1] who, thanks to the light of the full moon, performs a semi-dive bombing from an altitude of about 1 500 meters.

They are followed by three Fairey Battle: No. 907 (Captain Piet J. Robbertse, Air Sergeant H.V. Barfield), No. 909 (Lieutenant Brian L. Hutchinson, Air Sergeant S.H. Hipkin) and No. 906 (Lieutenant Bernard S.M. Hamilton; Sergeant I.S. Thorburn) who drop their bombs in low flying, while several anti-Italian leaflets are dropped in the vicinity. Note that the bombing is done individually by each aircraft, with an alternation of thirty minutes.

In all, 6 300-pound bomb load is dropped on the airfield, along with 5 000 leaflets. The result appears, however, very limited with the destruction of one AA, and unknown damage to the hangars.

The presence of Italian planes is difficult to determine and reports from No.11 (SAAF) Squadron report a possible bomber destroyed on the ground, while those of No.12 (SAAF) Squadron regret the lack of any aircrafts.[2]

[1] Unfortunately, the mission order in the squadron’s ORB is difficult to read and does not make it possible to determine the names of the crews and serials of aircrafts involved.