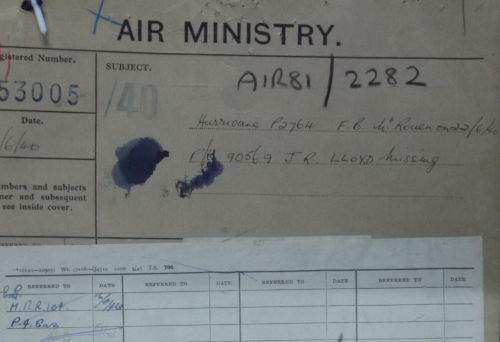 Nine Hawker Hurricanes take off from Kenley to join Hawkinge at 05h45. They leave at 07h00 for an offensive reconnaissance of the Abbeville – Poix – Rouen – Dieppe sector. [1]

The formation seems to separate during the mission and the ORB indicates that only five pilots encountered, near Rouan, a formation of He.111s of III./KG 1 escorted by Bf.110s of 7./ZG 26 around 07h45. The British pilots split in two as Squadron Leader Joseph R. Kayll claimed two He.111s (one inconclusive and one probable), while Flying Officer Peter Collard also claimed an inconclusive victory over one of the bombers. According to Peter D. Cornwell, one of the He.111s made a forced landing west of Rouen. [2]

At the same time, the other three pilots fight with the escort. Flight Lieutenant James G. Sanders claims two Bf.110s (one conclusive and one inconclusive). The same applies to Flying Officer Anthony Eyre with another conclusive claim against one of the fighters. The 7./ZG 26, however, does not appear to suffer a loss.

Unfortunately the toll of the confrontation is also heavy for No.615 Squadron as Pilot Officer John R. Lloyd is shot and killed during the confrontation. His Hawker Hurricane Mk I P2764 crashed near La Mailleraye-sur-Seine at about 0815 hours. He is probably a victim of the Leutnant Kuno-Adalbert Konopka, of the 7./ZG 26. He was 30 years old. He will be buried in the communal cemetery of La Mailleraye-sur-Seine.

« It appears Lloyd was flying a Hurricane or Spitfire over La Maillerage on June 22 1940, and was attacked by 8 or 9 German fighters. He put up a magnificient fight though hopelessly outnumbered and shot down two German planes and possibly three. It was too much for him, poor boy, for in the end he was hit. The plane crashed or made a false landing about a mile from the village. It hit a tree and was wrecked. Lloyd was dead when the inhabitants found him, it seems he was hit by a bullet or bullets in the neck and, no doubt, was killed instantaneously before the plane crashed. »[3]

According to the report of the local Gendarmerie Brigade, the plane fell at Le Wuy at 08h15, after a fight over the forest of Brotonne. [4]

For its part, Flight Lieutnant James G. Sanders is forced to make a forced landing on the Isle of Wight due to fuel exhaustion. His aircraft, the Hawker Hurricane Mk I P3487 was, however, undamaged.

According to Flying Officer Peter Collard :

« During a reconnaissance with four other aircraft, I observed a formation of He.111s. As I was preparing to attack, I saw three Bf.110s probably operating in escort of the bombers. I attacked one of the three and destroyed its right engine. It disappeared as it lost altitude. I try to do the same with the other two, but they make several turns that prevent me from aiming. I can’t observe any more and I climb quickly with little ammunition I have to continue my reconnaissance on my own before finding the Squadron over Dieppe.»[7]

According to Brian Cull :

« According to a report from Zurich, General Fritz Löb, commander of the Luftgau Belgien-Nordfrankreich, was shot and killed by a British fighter during a reconnaissance flight. » [8]

According to another source, the aircraft carrying, among others, General-Major Fritz Löb was involved in a fatal collision at Brussels-Evere airfield. At the same time, the KTB of 9./JG 54 indicates on the Junkers Ju.52 transporting a general was the victim of an air collision with a Do.17, although no correspondence can be found for the date.[9]

The report by Keith T. Lofts [10], besides being difficult to read, further adds to the mystery of this claim. Indeed, it indicates that the battle takes place around 08h30 in the vicinity of Forges-les-Eaux, which more or less corresponds to the places where the other confrontation takes place. There is also mention of a “troop transport” identified as a Ju.52 flying at ground level (about 600 meters). The confrontation (by diving from the sun) is very short and the pilot abandons his attack, without observing the result, due to the arrival of at least three Bf 110s. No further information on this event is available.

The remaining eight aircraft returned to land between 08h47 and 08h55.

Loss : Pilot Officer John R. Lloyd (Hawker Hurricane Mk I P2764). Killed in aerial combat with Bf 110s, around 08h10, in the vicinity of Mailleraye-sur-Seine. Probably victim of the Leutnant Kuno-Adalbert Konopka, of the 7./ZG 26.