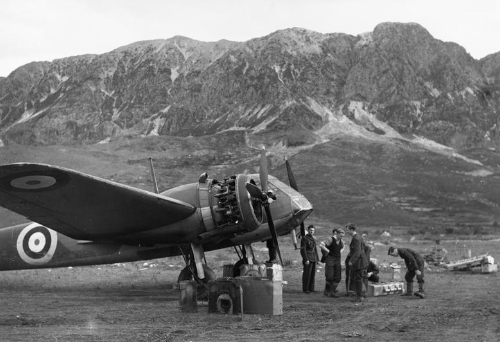 The Bristol Blenheim Mk I L1434. The aircraft is in service with No.211 (RAF) Squadron on the Paramythia Airfield (Greece) in February – April 1941. The aircraft will be lost in air combat on 13 April 1941, over Albania. Source : Imperial War Museum

A Caproni Ca.133 is reported over Garissa, between 04h15 and 05h30, where some bombs are dropped without consequence [1].

Three IMAM Ro.37bis from the 110 Squadriglia RT leave Dire Dawa to join Mogadishu, they will be joined in the following weeks by the rest of the unit [2].

Finally, No.40 (SAAF) Squadron continues to multiply its armed reconnaissance sorties on the borders. According to Major James T. Durrant :

« “The area was regularly threatened by irregulars in the service of the Italians. As a result, the aircraft were lined up in laager[3], with regularly patrols between them and the bush. Officers and other personnel had to sleep in the middle with their weapons at hand. During the missions, crews often flew barefoot or with a simple t-shirt (hence significant consequences in case of fire), with the obligation nevertheless to bring a pair of army boots in case of forced landing. On site, the living conditions were very difficult, especially because of the lack of water. Initially, rations were very limited. However, Brigadier C.E.M. Richards (West African Brigade) was informed that the Squadron seriously missed water for the engines with a serious risk of the damaged ones. Of course, it was not stated that the Hartbees radiators only needed glycol. As a result, the Squadron was able to benefit from an additional reserve. Finally, due to the lack of staff for cooking, the District Commissioner proposed to make available a man convicted of murder and awaiting trial in a local prison. The latter was to remain until the end of the campaign and bring full satisfaction. »[4]

The situation of No.1 (SAAF) Squadron in Sudan is hardly better since it has no medical officer and technical officer, while advanced terrain consists only of a vague area with a fuel tank, and without any material.

[3] Storing aircrafts in a rectangle or circle, in the pure Afrikaner tradition, to constitute a defensive formation.