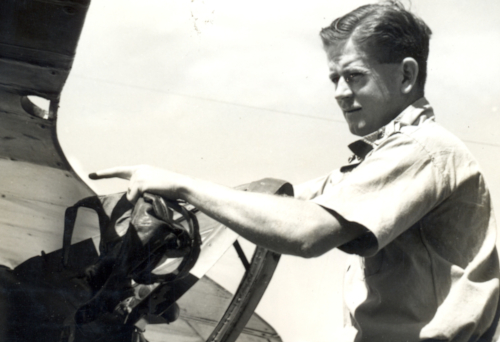 The events of the day allow to highlight the major evolution provided by the arrival of the Hawker Hurricane on the southern front.

Thus, three Savoia-Marchetti SM.79 are sent to bomb Port Reitz, near Mombasa, at an altitude of about 4 500 meters. Two Hawker Fury of No.2 (SAAF) Squadrons take off, under Lieutenant Hendrik JP Burger (N°200), to intercept them at 05h10. The pursuit is running short as South African pilots are unable to catch up with them or even to reach the necessary altitude. The frustration is widely expressed in the unit’s journal with the mention “Damn these Furries”. Another detachment based in Ndege’s Nest has also the same result.

At the same time, following the upsurge of Italian bombers, it appears necessary to put the Hawker Hurricanes into action as quickly as possible. A double problem arises, however. First the No.3 (SAAF) Squadron pilots have just arrived and have no familiarity with the area of operation. The idea is then to temporarily send some aircraft to No.2 (SAAF) Squadron. However, it is clear that its members have often no experience on the Hawker Hurricane and have never piloted a monoplane. Due to the limited stock of aircraft, it is considered necessary to minimize the risks. Finally, two aircraft were assigned to Lieutenant Douglas H. Loftus and Flight Lieutenant Robert S. Blake.

Flight Lieutenant Robert S. Blake is a very special case. South African, he was born in Pretoria of a family settled in the country for four generations and studied at the University of the Witwatersrand in Johannesburg. Passionate about aviation, he must recognize that the opportunities are relatively small in his country and even more with the SAAF. He decided, therefore, to join London to apply for the RAF, which he obtained a Shorte Service Commission in September 1935. At the time of entry into the war, he served as a Flight Commander with No.54 (RAF) Squadron equipped with Spitfire. He obtained, however, in May 1940 the authorization to be provisionally released by the RAF to join the SAAF in order to communicate his experience to his compatriots. He is then assigned to No.2 (SAAF) Squadron operating in Kenya.

The two Hawker Hurricanes were then deployed on the evening of 24 October on the Lokitaung ,near Rudolf Lake, in the extreme north-west of the border with Ethiopia. The next morning, three Savoia-Marchetti SM.81 of 29bis Gruppo BT take off from Yabelo to bomb the Lodwar airfield, under the orders of Capitano Tito Zucconi. Flight Lieutenant Robert S. Blake (No. 285) and Lieutenant Douglas H. Loftus took off and intercepted them around 10h45. A first bomber (Sottotenente Argento) was quickly shot down by Flight Lieutenant Robert S. Blake. The pilot is immediately killed, while the co-pilot attempts a crash landing. Unfortunately, the impact on the ground is violent, killing all the crew except the radio operator, a certain Signorelli. At the same time, Lieutenant Douglas H. Loftus succeeded in severely damaging the bomber of Sottotenente Titi. The italian managed to land near Lokitaung. The crew quickly set fired to the aircraft before being captured by British troops. The leader, although damaged, manages to escape and return to Yabelo. This interception is, therefore, a real success for South African pilots in particular face a relatively modern aircraft as the Savoia-Marchetti SM.81. It also illustrates the growing gap between the two South African fighter squadrons, one equipped with an obsolete biplane and the other with a relatively modern monoplane. However Lieutenant Douglas H. Loftus need to return as a result of the jamming of these machine guns, whereas after his return a mechanics note that all the weapons except one of the Flight Lieutenant Robert S. Blake’s aircraft are no longer working.