Victory Was Beyond Their Grasp – Douglas E. Nash 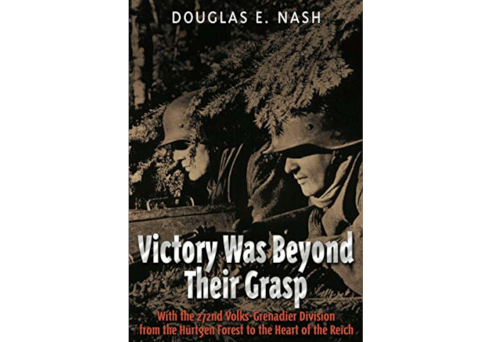 Victory Was Beyond Their Grasp - Douglas E. Nash

Douglas E. Nash. Victory Was Beyond Their Grasp: With the 272nd Volks-Grenadier Division from the Huertgen Forest to the Heart of the Reich. Casemate Publishers, 2015. 416 p.

I recognize that I am not a great reader of monographs about Army units. However, I wanted to read about the fighting on the Western Front in the winter of 1944 / spring of 1945, and this book was recommended to me.

The book is of threefold interest:
– it deals with the battles of the Battle of the Hürtgen Forest, and then with the various clashes around the Rhine;
– from the German point of view (which is not necessarily obvious given the almost total absence of archives from the beginning of 1945);
– while providing details on the organization and functioning of a Volks-Grenadier Division, i.e. an ordinary Heer Division at the end of the war (and not the traditional elite units which are the subject of a multitude of monographs…). By specifying that the study is essentially centered on the Fusilier Company of this Infantry Division.

It should be made clear that the concept of the Volks-Grenadier Division originates in a multiple context:
– the bleeding of the Heer in the Normandy fighting and Operation Bagration which resulted in the near destruction of many German Divisions and a necessary reconstitution;
– the attempt of the Heer to draw on the last human reserves, whether by integrating personnel from the Luftwaffe (ground personnel or bomber pilots in particular), the Kriegsmarine (excluding U-Boats), by reducing the convalescence of the wounded and by calling on the last Germans still exempt while integrating a core of veterans;
– the taking in hand of the replacement army (Ersatzheer) by Himmler with a desire to politicize the Heer, hence the reference to the Volks and the ambition to make them elite divisions (in practice the conditions of war will prevent the political project);
– an attempt by an armament modernization to increase firepower while reducing the number of troops. Here again, in practice, the Volks-Grenadier Division would suffer from a drastic reduction in artillery, service elements, logistics, etc, often leading to senior officers having to assume immediate command in the field.

The Volks-Grenadier Division will thus be made up of almost 50% Luftwaffe and Kriegsmarine personnel, while benefiting from mentoring from the 272nd Infantry Division engaged in Normandy.

The book is endowed with numerous testimonies, while the author regularly cross-references German sources with American ones.

Overall an interesting reading to apprehend these last months of fighting in the West and tried to understand the reasons that allowed the Heer to avoid the explosion in the West and to hold until the collapse and the cataclysm of spring 1945.

If you would like to support my site, you can purchase the book on Amazon using the following affiliate link.