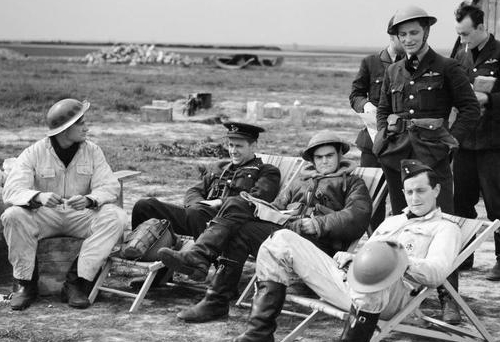 The objective for A Flight is to provide protection for the British liaison ships, which will now be the main flight activity (and partially for B Flight) until March 1940.

According to the mission orders [1], the British connecting vessels must serve the following ports: Boulogne – Douvres or Folkestone ; Dunkirk – Dover and Calais – Harwich. The RAF must cover the ships from each French port within a radius of about fifteen kilometers, before transmitting the relay to Fighter Command. Each port corresponds to a patrol zone called Patrol Line A (Boulogne – 1,800 meters), Patrol Line B (Dunkirk – 3,000 meters), Patrol Line C (Calais – 1,500 meters).

Three sections of No.615 Squadron must be deployed, nine Gladiator Gladiators, as well as the necessary personnel. Each detachment is scheduled for a period of approximately five days.

In practice this mission will be mainly provided by B Flight, while a regular rotation of pilots of the second Flight will take place.

Unfortunately, the inauguration of this new routine is tragic. While the weather is deteriorating rapidly in the afternoon, Pilot Officer Stanley M. Wickham is killed when his aircraft (N5582) crashes on the ground during the landing following a stall at 13h40. He is buried on 21 December 1939, at the communal cemetery of Douai [2].

On 28 December 1939, a patrol of a section of A Flight, from Saint-Inglevert (between 08h55 – 10h00), marks a major turning point for No.615 (County of Surrey) Squadron. Indeed, during the flight, Flying Officer Herbert S. Giddings reports the presence of an aircraft identified as a Heinkel He 111. The events do not go much further and the German bomber quickly escapes.

As the day before, pilots continue their patrols of the sector of Saint-Inglevert. The major event takes place at 13h10 when Flight Lieutenant James G. Sanders takes off aboard the Gloster Gladiator Mk II N2308. A Heinkel He 111 from Wekusta 26 is then reported above Wissant at about 7000 meters. A pursuit commences and Flight Liutenant James G. Sanders catches up with the German bomber south-west of Dover and opens fire. The Heinkel He.111 engages immediately in a dive up to 1000 meters and disappears in the clouds. Due to the low visibility, the pilot decided to abandon the pursuit without being able to appreciate the results of his attack [3].

The New Year begins with a slight incident on 2 January 1940 when Pilot Officer David J. Looker and Thomas C. Jackson are forced to a forced landing at dusk aboard the Miles Magister after a liaison flight between Vitry -en-Artois and Saint-Inglevert. No damage or injury is however to report.

In the light of good news, during an inspection visit, Deputy Secretary of State for the Air Harold H. Balfour and Air Vice-Marshall Sholto Douglas are pleased to announce the upcoming transformation of the No .615 (County of Surrey) Squadron on Hawker Hurricane. Pilots will, however, have to wait until the beginning of April to begin their transformations on this more modern aircraft than Gloster Gladiators.

Finally, the unit receives the reinforcement of a new pilot with Pilot Officer Horace E. Horne, on 1st January 1940. This Canadian pilot, born in Edmonton, joined the RAF as a pilot probably in the mid-1930s, since he was admitted to the reserve on 23 October 1937, before being recalled on duty at the time of entry into the war.

On 3 January 1940, Flying Officer John R.H. Gayner suffered an accident due to a motor problem (rupture of the oil pipe) on his aircraft. Forced to a forced landing near Crécy-en-Ponthieu, he breaks the tail wheel. He does, however, without injury.

Gloster Gladiator Mk II of No.615 Squadron on the airfield of Vitry-en-Artois. Source : Imperial War Museum.

The 20 January 1940 saw the departure of the Flying Officer Eric C. Fieldsend, who had been part of the Squadron since its origins in 1938. It was transferred on that date to No.61 (RAF) Wing. On 19 June 1940, he joined the No.4 (RAF) Ferry Pilots Pool. His presence is very short since he is reported at No.10 (RAF) Group, from the 24th of the month. On 20 July, he is attached to Middle Wallop air base where he seems to serve as air control [4]. The rest of his career is not known. He finished the war with the rank of Squadron Leader, then left the Royal Auxiliary Air Force Reserve of Officers with the rank of Wing Commander in December 1954.

If information is relatively scarce concerning the ground personnel, the ORB informs us of the death of the Aircraftman Henry Clemson as a result of a possible meningitis on 21 January 1940. He is buried, on 23 January, at the cemetery of Douai.

The end of January 1940 is marked by the arrival of two new pilots : Pilot Officer Michael R. Mudie and Ralph Roberts. The first (42073) was born in Singapore on 26 February 1916. He joined the RAF with a Short Service Commission in March 1939, where he trained with No.11 (RAF) Group Pool, then No. 2 (RAF) Ferry Pool from November 1939 [5]. The second (90897) joined the Auxiliary Air Force with No.616 (South Yorkshire) Squadron in March 1939. After his training, he joined the No.2 (RAF) Ferry Pool in December 1939, where he was in charge of convoying Hawker Hurricane to their assignment squadrons. The happy coincidence finally makes it one of the few pilots of the squadron to have an experience on their future aircraft [6].

The month of February 1940 is relatively calm because of a most deplorable weather. However, a new pilot joined the squadron on 28 February 1940 : Flying Officer Lionel M. Gaunce. Born in Lethbridge (Alberta, Canada) on 20 September 1915, he served in the Canadian Army in the Loyal Edmonton Regiment with the rank of Corporal between 1933 and 1935. He joined the RAF with a Short Service Commission in January 1936. After his training, at the No.5 (RAF) Flying Training School in Chester, he joined No.3 (RAF) Squadron in October 1936, and served as Acting Flight Lieutenant from April 1939. He is, however , slightly injured in a motorcycle accident at the end of June 1939 and, after four weeks in the hospital, he is transferred to No.17 (RAF) Squadron. This is, for once, a relatively experienced pilot, including on Hawker Hurricane [7].

A tragic accident takes place on the night of 6 March 1940, when Aircraftman 1st Class Reginald E. Parfitt falls in a canal near Vitry-en-Artois. He is buried in the communal cemetery of Douai [8].

From 15 March 1940, it is clear that the quality of the ORB knows some deterioration.

From now on, the mention of mission hours is no longer regular, and is often limited to indicating the duration. It is also not impossible that some flights are absent. It is, indeed, obvious that the patrols are carried out, from this date, individually by the pilots, with regard to the documentation. Admittedly, this practice is not systematic, but it becomes fairly regular. It remains to be determined whether this development corresponds to a new modality of operating or a lack of precision of the documents. In addition, the unique mention of the duration, several times, prevents to be able to determine if patrols are individual or not. This situation worsens for the month of April when the activity is summarized in one page with two entries (1st – 12th April and 27th April).

It is true that the period is essentially devoted to the transformation on Hawker Hurricane.

Thus, it must be recognized that the period from mid-March to the end of April is the subject of very limited documentation as to the precise activity of the unit. In all cases, as in previous months, the majority of patrols continue to be conducted from Saint-Inglevert to ensure the protection of British liaison ships.

On the other hand, we note the return of Pilot Officer Patrick G.M. Hancock. The latter, a member of the unit before the war, was transferred on 4 October 1939 to No.151 (RAF) Squadron. Its passage is short-lived since he is returned to No.615 Squadron as of 18 February 1940.

The departure of Squadron Leader Arthur V. Harvey is confirmed on 12 March following his promotion to Wing Commander. He officially leaves his command on 16 March 1940 to join No.14 (RAF) Group. He finished the war in various administrative and command posts, with the rank of Air Commodore. After the war, he decided to enter politics and was elected to the House of Commons in 1945 with the seat of Macclesfield in the Conservativ Party. He remained in office until 1971. Appointed Peer for Life (Baron Harvey of Prestbury), he died at St Martin’s Port on the Island of Guernsey on 5 April 1994.

At the same time, Squadron Leader Joseph R. Kayll arrives to ensure replacement. The latter is not unknown to pilots since he comes from No.607 (County of Durham) Squadron, also attached to No.61 (RAF) Wing and based on the same airfield Born on 12 April 1914 in Sunderland, he studied at Aysgarth School in Yorkshire, unsuccessfully, since he left school at the age of 16 and went to work in a sawmill. After obtaining his pilot’s license, he joined the Auxliary Air Force in 1934. He received training as an instructor at the Central Flying School in Upavon in July 1939. [9]

As the events are relatively calm in France, several pilots have periods of rest to return to England. This is the case of Pilot Officer Michael R. Mudie. His permission is, however, not easy. He finds himself in the midst of an incident on 6 April 1940, at a dance party at Coronation Hall in Kingston upon Thames. In this case, an altercation broke out between him and other members of the RAF following a dispute over his buttons irregular uniforms (it seems to bear, memories of his stay in France, those of the French Air Force). Michael R. Mudie opens fire with a pistol. He was quickly taken to the police station, in an alcoholic state and slightly wounded with a bullet in his right leg. According to his defense, quite angry he would have drawn his gun and fired two shots towards the ground. One of the bullets would then ricochet and touch his leg. He finally gets out with a fine and the confiscation of the weapon. The incident, however, does not seem to have had any consequences as he returns shortly after to No.615 Squadron [10].

We have little information about No.615 Squadron during the month of April 1940. The ORB summarizes a single page with only two entries (1st – 12th April and 27th April), and the documentions is very limited. . We can however note some events.

First, the Squadron leaves the airfield of Vitry-en-Artois on 12 April 1940 to join Poix. At the same time, B Flight remains at Saint-Inglevert to ensure regular patrols, always without significant events. The presence in Poix is however of short duration and on 27 April 27, A Flight os transfer to Abbeville. On the same date, the first Hawker Hurricane Mk I arrive finally and the transformation can begin.

Two movements take place during the day of 9 May 1940. First, the B Flight leaves Saint-Inglevert to join Abbeville to discover their new aircrafts. At the same time, the A Flight leaves for Le Touquet to experience Hawker Hurricane on patrol over the English Channel.

But, the awakening will be brutal the next day …