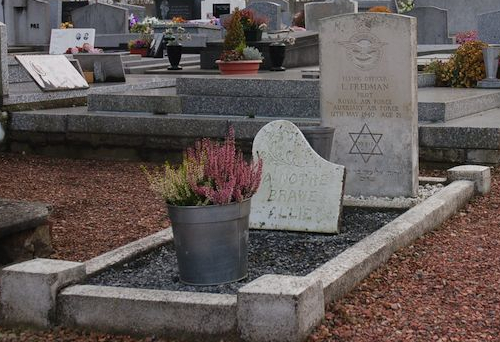 Unlike the day before, No.615 Squadron is experiencing more intense activity. In order to compensate for the shortages, the A Flight receives the order to join the former airfield of Vitry-en-Artois in order to cooperate with No.607 (County of Durham) Squadron. At least three patrols are conducted [1].

Unfortunately, one of them will end tragically. In this case, Flying Officer William F. Blackadder (P3535 – AF-C) is responsible for leading a patrol with five Hawker Hurricane Mk I of No.607 (County of Durham) Squadron, and three other from No.615 Squadron, including Flying Officer Hedley N. Fowler (P2622) and Levin Fredman (P2564) [2].

The whole formation took off at 9.30 from Vitry-en-Artois and, at 10h00 around Tongeren, the British pilots encountered a formation of Bf 109 from I (J) ./ LG 2, and the confrontation breaks out. If Flying Officer Hedley N. Fowler is able to claim a victory [3], his compatriot Levin Fredman does not return. His plane crashes at Wihogne, near Liege. His lifeless body, extracted from the carcass of the plane, is buried in the nearby cemetery [4].

The German pilots claim the destruction of three enemy fighters : Oberleutnant Hans-Erwin Jäger (1.Staffel), Leutnant Helmut Mertens (2.Staffel) and Oberfeldwebel Hermann Guhl (1.Staffel). At the same time, a Bf 109 (2.Staffel) is forced to a forced landing west of Tongeren (70% damaged) [5]. For his part, Peter Cornwell mentions that the fight would have also involved aircrafts of I./JG 21 and the JG 27, while the loss of the Flying Officer Levin Fredman could be due to Feldwebel Erich Schröder (2./JG 27 ) [6].

[2] Unfortunately, the identity of the third is not known.

[3] If this claim is cited by several authors, including Brian Cull (Twelve days in may) or John Foreman (RAF Fighter Command – Victory Claims), there is no reference in the Squadron ORB. In addition, no combat report has survived.