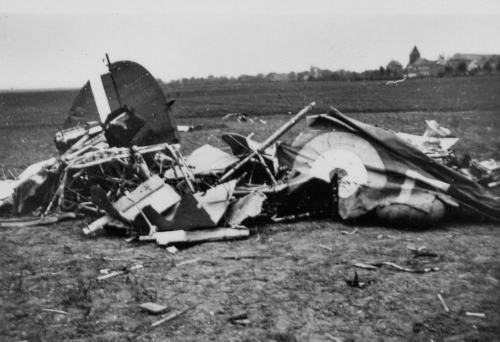 Brian Cull reports the presence of B Flight on Merville airfield, with a number of training on Hawker Hurricane Mk I [1].

The A Flight remains deployed for the day on Vitry-en-Artois with No.607 (RAF) Squadron.

The first mission is to escort a Bristol Blenheim Mk IV, No.18 (RAF) Squadron, over the Albert Canal to check the condition of the bridges. The take-off is severely disrupted by the announcement of the arrival of an ennemy bomber formation [2] or because of the maneuvers of the bomber [3], and only two Hawker Hurricane Mk I (Squadron Leader Joseph R. Kayll, Flight Lieutenant Leslie TW Thornley) are able to provide the escort. The mission unfolds without incident, but the aircraft of Flight Lieutenant Leslie T.W. Thornley (wing spar) and the Bristol Blenheim are damaged by ground fire. Note that the Bristol Blenheim Mk IV L8866 (Flying Officer D.D. Rogers; Sergeant A.J. Gulliver ; Leading Aircraftman D.C. Moore) of No.18 (RAF) Squadron is reported to be damaged during a reconnaissance over the Albert Canal at approximately 06h45 due to ground fire [4]. Maybe this is the same mission ?

« The Squadron was ordered to escort a Blenheim on a low-level reconnaissance of the Albert Canal, to find out how many bridges were still standing. The Blenheim arrived at Merville and we took off together. The Blenheim arrived at Merville fast as a Hurricane and as he turned sharply several times, the outside aircraft were unable to keep up. Finally only myself and Flight Lieutenant Thornley (in a bullet-damaged aircraft) were left as escort, one on each side. The Blenheim pilot was skilled as he flew under the bridges when they were intact and the escort flew over the ends. The only trouble occurred on the way back when we flew low over a large German Army formation, who shot at us with everything they had. The rear gunner of the Blenheim was wounded and I was saved by the armour plate behind my seat »[5].

Finally, in the evening several aircraft take off, alongside No.607 (County of Durham) Squadron [6], for a patrol in the vicinity of Namur.

He was a member of No.615 (County of Surrey) Squadron, since his track record dates back to November 1937, and briefly served as B Flight Commander before the arrival of James G. Sanders. He was 23 years old, and now rests at Courrière Cemetery in Belgium [8].

The file contains a second interesting document: in this case a letter from his father (AG Murton-Neale) addressed to the Air Ministry on 10 December 1943. It mentions in particular the recovery, through the Red Cross, of a silver cigarette case with two bullet holes.

From there, all the hypotheses remain open.

Possible photograph of the remains of the Hawker Hurricane Mk I P2580 after the unfortunate fights of 13 May 1940.