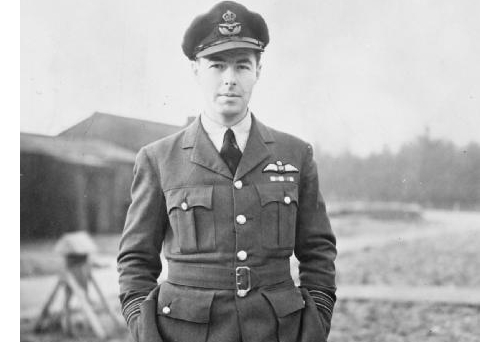 The day of 4 October 1939 is marked by the arrival of several pilots to reinforce the No.615 Squadron. However, the majority of them are relatively inexperienced either from flying schools or through rapid promotions as part of the RAF’s wartime expansion.

The Flying Officer Hedley N. Fowler (39457), although born in London on 8 June 1916 spent part of his childhood in Australia (Adelaide) when the family followed the father (Officer in the Royal Navy). It is true that he has an Australian connection as his maternal grandfather, Henry Ayers, served as Prime Minister of South Australia between 1863 and 1873. He returned briefly to England to attend school at the prestigious Rugby School [1]. Returning to Australia in 1933, he studied mechanics at the University of Adelaide, then joined the Royal Australian Air Force, where he got his wings on 8 December 1936 and won the Mannock Cup, before being transferred to the Royal Air Force with a Short Service Commission as Pilot Officer on 19 February 1937 [2]. After his training at No.6 (RAF) Flying Training School of Netheravon [3], he joined No.3 (RAF) Squadron on 22 May 1937 [4].

Pilot Officer Richard D. Pexton (72150) [7] was born on 26 October 1913, in Yorkshire. After attending St. Peter’s School in York, he worked at the family farm in Watton (East Yorkshire), while joining the Territorial Army as Second Lieutnant in the 5th Battalion, Green Howards, on 5 November 1932. He join later the RAF Volunteer Reserve as a pilot on 26 January 1938 [8].

Pilot Officer Stanley M. Wickham (40773) was most likely born in 1917 in the Sydney area, where he attended North Sydney High School. Holder of a pilotage certificate at the Sydney Aero Club [9], he joined the RAF around 1938 with a Short Service Commission [10].

Finally the most important reinforcement arrives by a strange combination of circumstances. This is Flight Lieutnant James G. Sanders (37510) [12] in charge of taking B Flight. He was born on 19 June 1915, in Richmond upon Thames in the suburbs of London. Educated, partly in Italy in Genoa where he meets some worries following his remarks on Benito Mussolini [13]. He joined the RAF with a Short Service Commission on 25 November 1935 [14]. After his training at No.10 (RAF) Flying Traning School of Ternhill (1st February 1936 [15]), he joined the prestigious No.111 (RAF) Squadron on 10 August 1936 [16]. In particular, he has the privilege of being the third to be converted on the new Hawker Hurricane when his Squadron is designated to test the aircraft. Unfortunately, an incident broke out in the summer of 1939 when James G. Sanders performed some unauthorized acrobatics aboard a Gloster Gauntlet after Squadron Leader Harry Broadhurst criticized his flying skills. [17] The various tensions (and probably ego) between the two men will, nevertheless, be well managed by the Fighter Command. If James G. Sanders is indeed transferred to a much less prestigious unit, No.615 (County of Surrey) Squadron wins a particularly experienced Flight Lieutnant.